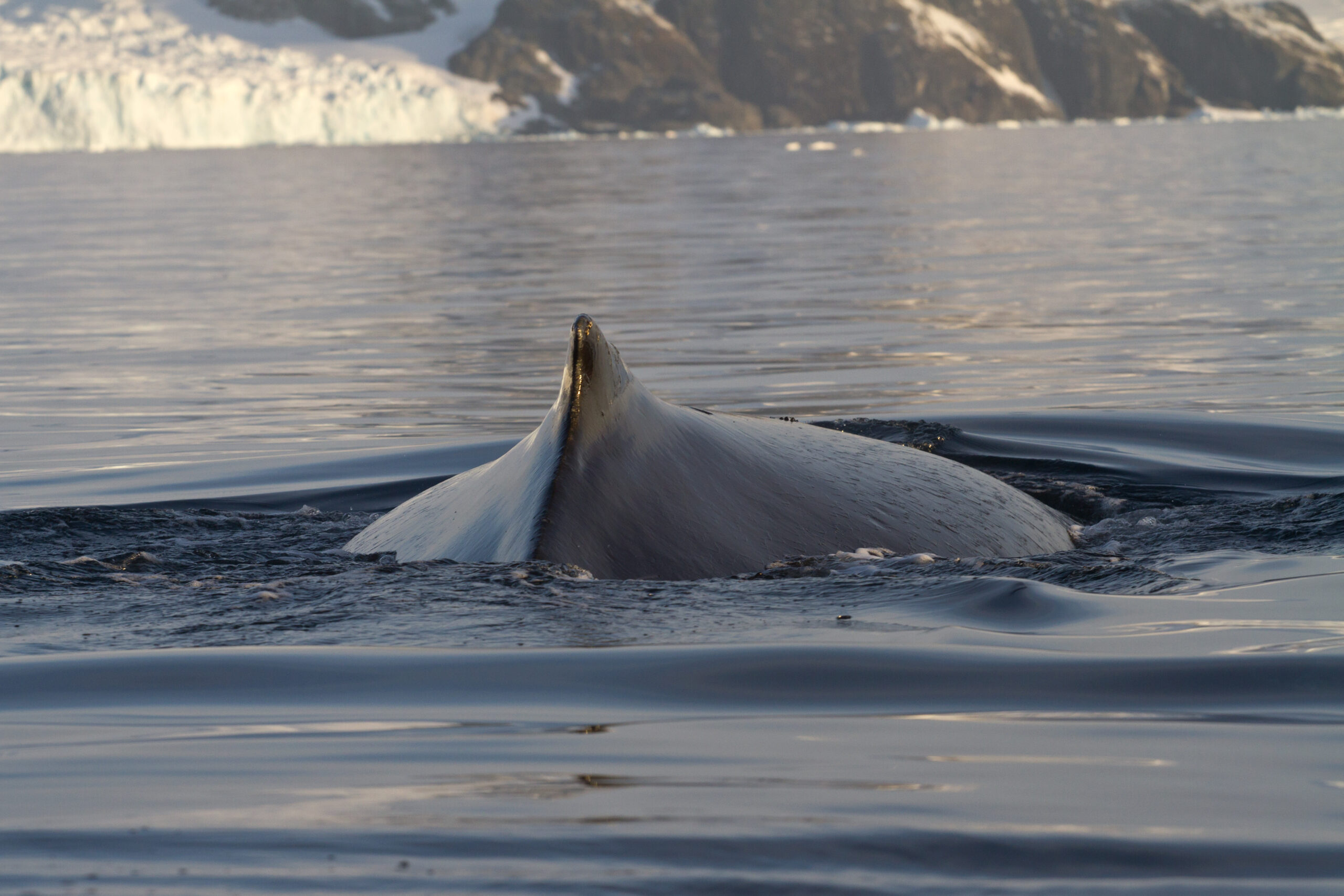 Back and fin and humpback whale

It was mid July about 10:30 pm when I jumped in the inflatable boat from the Elfin Cove sea plane dock and asked my guest to throw off the bow line. I never expected we could soon be on the flukes of a Humpback Whale. We were headed back to the sailboat for sleep.  The sky above us was crisp and crystal clear on that cool, calm, and enchanting Alaska Inside Passage night.

Our Alaska charter boat was anchored about 6 miles away, deep inside a well protected Inian Cove off North Inian Pass almost 90 miles west of Juneau Alaska, and a about  20 minute trip or so in the skiff on plane with the outboard motor.  I could not see Mosquito Pass or Middle Pass on the eastern edge of Cross sound as we approached.  Instead, there was a thick, heavy, low lying fog bank obscuring the bottoms of the Western Inian Islands. The highest 1600-1700 ft tops were exposed while the 100 foot high fog bank veiled their shorelines and rocky hazards.

The tide was rising with an increasingly strong easterly setting current when we crossed from a two mile visibility zone into an area of very striking contrast. It was not a gradual change. We crossed a defined line.  I throttled back just past Point Lavinia and we dropped off plane to a speed of three to four knots.  The first thing we saw at sea level was the fact that we could see nothing. Visibility was about 150 feet. It’s nice to have GPS chart plotting software on your iPad independent of cellular service.

Soon the rocks of the first western island in Middle pass appeared to the port side and we tucked into their lee, gently rising and falling with the swell following kelp lines.  As we ventured deeper into the fog, little black and white flocks of resting Pigeon Guillemots scattered into flight as the skiff got too close for their comfort.  Alaska birding could be a lifelong endeavor and there are tons of them to be seen on week long Alaska inside passage birding trips.

The evening unfolded like an eerie exotic scene from Tolkien’s “The Hobbit.” It’s no surprise that a spot nearby in the Inian Islands is known as “The Hobbit Hole.” I met it’s two former inhabitants many years ago and the property now belongs to Stanford University, which has done great things with its Inian Island Institute under Dr. Zachary Brown.

Half way thru Middle Pass, I shut down the motor to take our physical and imaginative senses into the wild, far from anything my guest would experience on a cruise ship or short, canned Juneau boat charter. The sounds of the ocean swell rolling through Cross Sound from the Gulf Of Alaska was finding its way up the rocky shores of these now invisible islands and exposed rocks all around us at varying distances.

Unlike the steady monotoned surf on a typical beach most of us are familiar with, the low roar of the surf encompassed us and could be heard in sequences at different decibels depending on the distance of the rocks the timing of wave sets. Our heads turned with each distinct crash of water. Even after 22 years in Alaska waters I am still thrilled by its raw nature and respectful of its power.

The second time I shut down he motor to soak in this audible lulling peace we were well inside Middle Pass.  The white noise and white fog contrasted sharply with the black water and black rock, accentuating this Alaska adventure charter for my guest. Intermittent scattered calls from foraging gulls that we couldn’t see rang out ahead and we could have stayed for hours taking in this unique experience but the swift current was dragging us from my comfort zone and I reached for the starter.

Then, suddenly we heard it.  The shocking breath of giants exploded just over my left shoulder, breaking the soft melodious tranquility of our surroundings with a different kind of peace. A virtual symphonic transition abruptly changed the mood when the first unmistakable “whoosh,” dominated nature’s musical score. While it was loud, it was like whisper in harmony with the rest of the sounds.

Under my tiny 14 foot skiff and right beside us to port, I saw the black shiny skin of a Humpback Whale dotted with bumps slowly and gently glided past. It’s blow hole opened and closed like a little mouth.  I could have easily touched it’s back with my hand. I hesitated in the few seconds afforded for the opportunity out of a desire not to disturb this amazing mammal. In seconds, another leviathan came up to starboard about 6 feet away, blowing spray and then a third seemed to float up from below and drifted motionless with us on the current. It was so close we could have stepped off onto her for a ride.

Humpback Whales on the surface travel in groups called pods

When they swam under us, I visualized riding these whales with our little skiff,  balanced easily on one’s flukes headed for a capsize. We were in the center of this remarkable cetacean pod living an experience so few ever have.  My heart pounded as my brain processed a sequence of events from a potential flick of a tail by one of these 60 foot long, 30 ton behemoths to one of swimming in the freezing water clinging to an overturned inflatable boat. However, the effect of this opportunity on the soul was a fabulous high of pure awe and spiritual fulfillment.  Our curiosity calmed us. Concern  subsided but we didn’t start the engine and risk startling them.

The whales stayed close to the skiff for perhaps 3-4 minutes passing by a few times observing us but it felt like hours.  Then they were gone as fast as they came, taking their next breaths about 100 yards away a bit later. They were as curious as we were but I don’t think we were very interesting to them.  It was an experience beyond compare and best left short.  As tempting as is was to follow, we do not chase and disturb whales. There is no need.

I’ve had many wonderful Alaska whale watching experiences under sail on my southeast Alaska boat charters, which include a pair of humpbacks that laid alongside the boat out on the Gulf, rolling over on their sides close enough to literally look into their eyes for several minutes.  That entire Humpback experience went on for a good 15-20 minutes in a dead calm wind with the engine shut down. The whales came to us on their own accord.  So do porpoise.  And if you go below decks you can hear their chatter.  Under sail, on the Gulf, I’ve also had Orcas parallel my course within 15-30 yards for fairly long periods.  They just show up, play for a while and leave.

We don’t chase after whales. It’s not permitted. They are best experienced when they come to US. If you give it time and are in the right places on a leisurely private Alaska boating vacation, they usually come around.

Charging out toward whale spouts crammed aboard Alaska whale watching tour fleets comprised of high speed cattle cars with 40 passengers at a time is not the kind of experience we offer. Evidence suggests the whales don’t like it and it’s detrimental to their well being.

According to the Journal of Marine Science (JMS), “there is concern that whale watching is detrimental to the target species. Numerous studies have shown that cetaceans exhibit behavioral changes in response to whale-watching boat traffic.”

We avoid traffic and try not to leave foot prints.

The JMS has concluded that “The introduction of guidelines or regulations for whale watching has been the most common method of trying to mitigate the impacts of boat-based whale watching.”  However, while the proponents and profiteers of this $2.1 Billion annual global industry profess their regulatory compliance and genuine concern, “compliance and enforcement can be poor,” and the legal under-pinnings, of monitoring and enforcement are often inadequate.  JMS studies also suggest there is little ethical pressure from paying tourists upon tour companies to diminish the negative impacts on whales. It seems the chase is on.

There is no better way to see the widest variety of the Alaska wilderness environment than from the water.  Alaska has 6,640 miles of coastline.  Florida has 1,350.

John has logged well over 30,000 nautical miles at the helm on the North Atlantic, North Pacific and South Pacific oceans, as well as in the Caribbean Sea, the Gulf of Mexico and in the Gulf of Alaska. John has also logged over 1,000 hours on the Cape Fear River of North Carolina.

Alaska Sailing Adventures Around Cross Sound & The Gulf Of Alaska