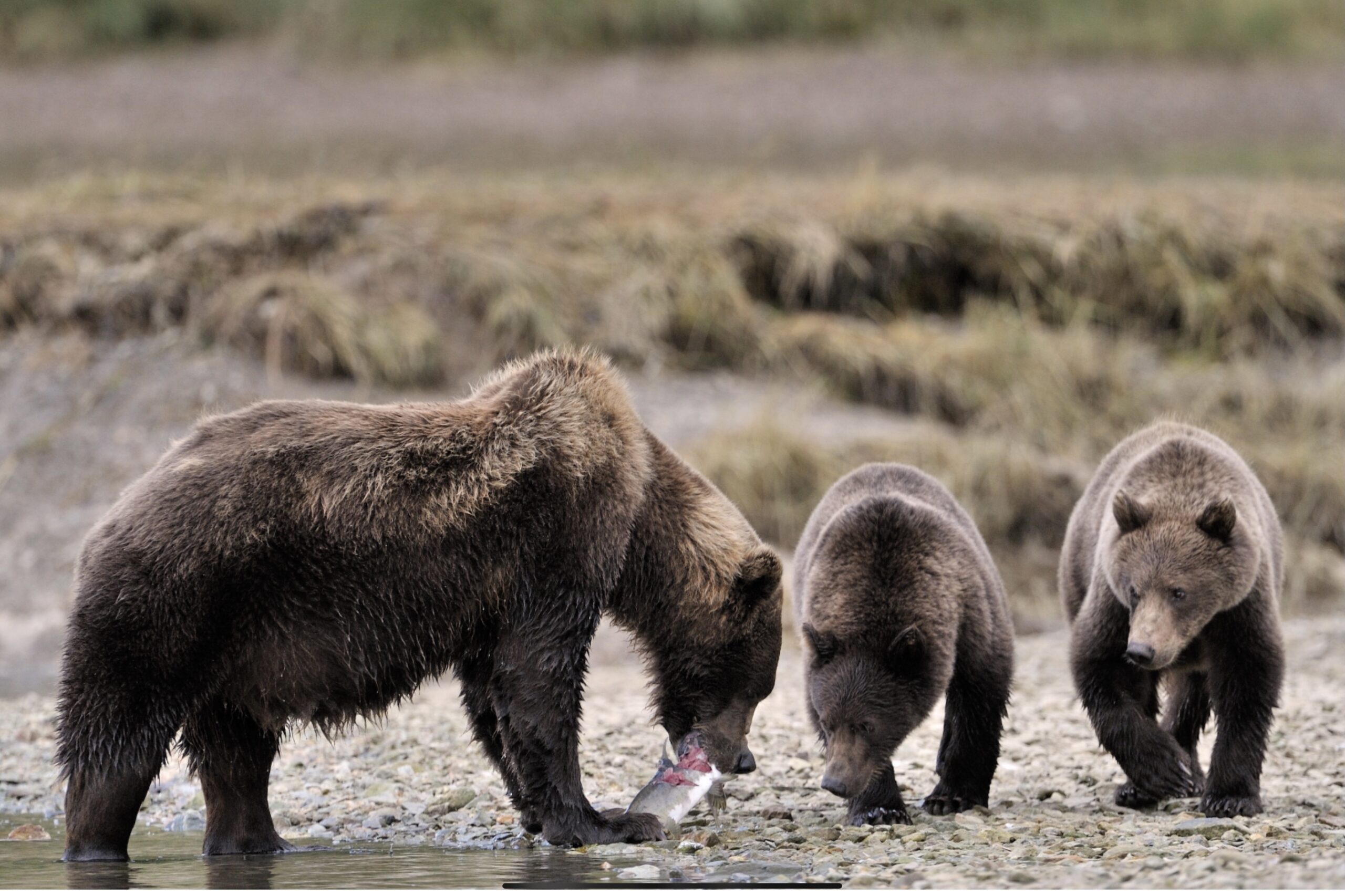 When sailing Alaska, doing bear tours last year I launched my kayak from an Alaska charter boat anchored on the inside passage. I enter giant spruce trees surrounding me in the Tongas National Forrest , gray skies are overhead.

The narrow river is a steel gray curve slicing between walls of dark green vegetation. Up and down the river, tall sentinels of yellow leafed cottonwood stand guard at the forest’s edge. It has become quiet. The silence in wild places at sunset, distinctly opposes the chatter of early morning.

It is in this solitude of evening that the brown bear appeared with her two cubs. This isn’t a playful splash in the water for them as it was in July. It is autumn. They are almost weaned, and have been taught a great deal. No longer tethered to their mother for food, brown bear cubs are nature’s quintessential adolescents.

They have learned to feed themselves, yet they cannot quite protect themselves. They are strong, yet untested. Their rise to the apex is not guaranteed. Their mother must double her weight to help see them through this, their final winter together.

Mom waddles pigeon toed through the creek, a broad beast who commands respect. Moving ahead, the cubs never straying too far, Mom pulls out a Coho salmon and puts a paw on it. There is a sound of breaking bones as she breaks its skull to gain the brain. It is both brutal and somewhat soothing.

Nature holds no prejudice. All beasts, all beings, constantly consume and die. It’s a circle. Nature’s circle is more like a whirlpool in that it comes back on itself. But we differ.

Man is more of a circle like a snowball rolling down a hill is a circle. We gain momentum. We roll, we gather, we take, and we get ever larger. Our momentum collides with everything.

A splash in the river garners my attention, the bears move past. They cast a gaze in my direction, aware but uncaring that I lurk somewhere on the river bank. In spite of my heighten senses, my mind chooses to wander.

At a primal level, life is basically about satiation and slumber. It’s all about food, specifically protein gathering, before the slumber. Utopia may occur when all animals have a full belly and a place to peacefully rest. Yet sacrifices are a requirement along this path to Utopia.  After all, a satiated Anteater has a belly full of ants.

Shadows absorb my eyesight. Bears are big, yet they blend into the riverbank until I am unsure of their movements. I can only detect sounds, which seem to change direction in the air making it difficult to triangulate. They could be leaving, or they could be coming closer. It mattered little to me. I was happy to be among them. I feel no panic. In the shadows, along the riverbank, as the bears pass through, I accept my vulnerability in Nature.

* For over two decades, Kenn Magowan has led hundreds of paddling trips throughout remote and pristine areas of Alaska, the NWT of Canada, Svalbard, and Antarctica.

The Feel of Alaska Sailing Adventures on An Inside Passage Boat Charter; Admiralty Island.