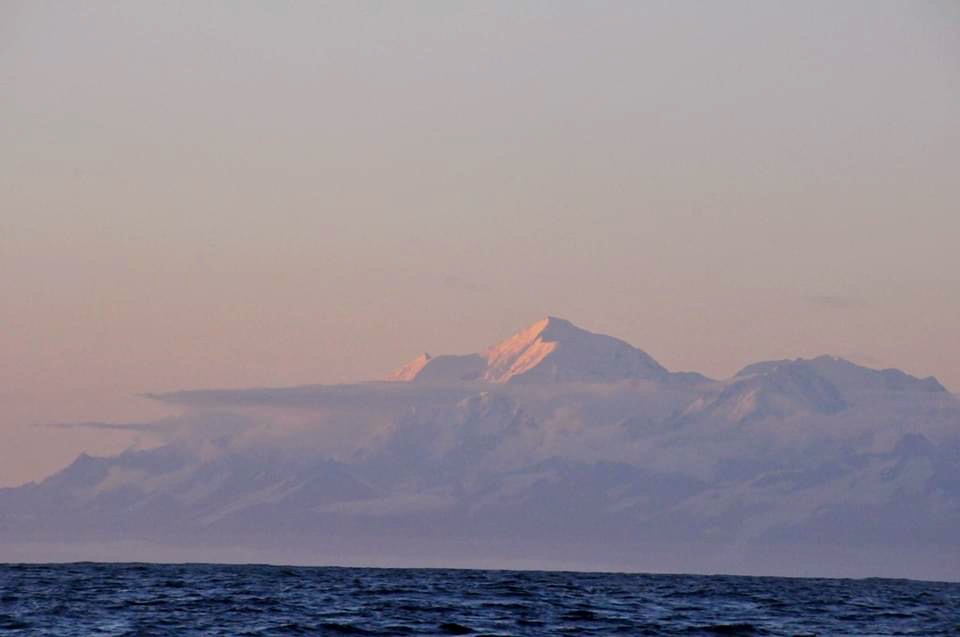 When Sailing Alaska offshore of northern southeast Alaska, the dominant feature is Mt. Elias in the Yukon Territory.  St. Elias is the second highest peak in North America at 18,009 ft and can be seen for days before making landfall. When you enter Cross Sound between Cape Spencer and Yakobi Island, you are soon surrounded by the Tongas National Forrest, a temperate rainforest. You are sailing on the northern end of the Alaska Inside Passage with over 1,000 islands and thousands more fjords and bays to explore along the Alexander Archipelago in Alaska alone. To the south lies Ketchikan, Wrangle and Petersburg and the the British Columbia boarder and Canada, nearly 500 miles away.

Cross Sound was named by Captain James Cook in 1778 and is at  58” 10’ N x 136” 30’ W. It is 30 miles long and about 4 to 8 miles wide. Here, you can see a little bit of everything Southeast Alaska vacations have to offer. There are seemingly endless kayaking paddles to take, trails to hike and wildlife to view. Vistas are spectacular everywhere you look. I could live here.

Cross Sound waters can be more turbulent at times than most of our Southeast Alaska sailing charters.  Conditions can change fast. Gulf of Alaska gales often emanate in the North Pacific, The Bering Sea and Arctic Siberia and can push seas in the sound to 20’ or more. This is not as likely between June and early September. Obviously, itineraries are subject to change based on conditions.  I always take prudent action for weather.

The sound can lay back down in a reasonable time. There are numerous well protected anchorages inside of the sound so there is always something to see. A favorite is Inian Cove not far from a colony of Stellar Sea Lions.

Alaska charter boats do offer socially distant vacations in these times.  Cross Sound is also a good place for Alaska fishing charters. The commercial fleet of small salmon trollers drag in the sound during fishery openings but its nearly 90 miles to Juneau and few sport fisherman there venture so far out.  Many small commercial boats call at Elfin Cove to sleep and off-load their catches for packing. Elfin Cove is a small and incredibly unique, picturesque Alaskan coastal fishing community with a population of about 20 residents, down from 50 in 1990.

I have spent weeks at a time in Elfin Cove over the years wandering the boardwalks from the outer harbor on the sound to the completely protected inner harbor, lined by a community nestled tightly between steep mountains of about 200 feet and up to around 2,000 feet to the SE. There are no roads here and no vehicles. They aren’t needed. This is a place like no other.

The waters in and around Cross Sound are a great place to start Alaska wildlife tours, Alaska birding tours and Alaska whale watching. Whatever your interest, all of these opportunities abound on SV Shamrock. Since the sun sets 10:08 and rises at 3:51 am in mid June you’ll have plenty of time. On clear days that means its daylight until about 11:00 pm and light again by 2:45.

Cross Sound at Sunrise coming off the gulf – by John. Joeright

MENTION THIS BLOG AND GET ONE COMPANION FARE FOR

Tags: A blog about Alaska sailing charters on the Alasla Inside Passage

The Feel of Alaska Sailing Adventures on An Inside Passage Boat Charter; Admiralty Island.